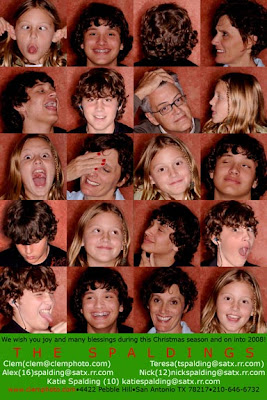 Show me the law that sez holiday cards must be mailed during the Holidays….St. Nick smothered us in electronica….Dennis Kucinich is underrated as a beautiful man….Belt sanders come in more than one size…Farewell to Scooter Rizutto….You have to take your shoes off for a pedicure….Katie sold her first painting at our garage sale…These days you have to look closely at your kid before you yell at them because their blasted iPod earbuds cut off all parental audio. Except for words like “cookies” or “allowance.”….Yelling louder works too. Sometimes…My pens simply evaporate off my home office desk. No one knows why…There’s no such thing as too much ice cream…”Don’t tase me, Bro!” Gotta love it…..Aardvarks are terrible dancers….Ten gallon aquariums can and DO break….Have you ever noticed that everything is better with coffee?….Switzerland has no navy. What’s up with that?…Our garbage disposal is growing obese….One more online password and I’m going postal….Nick is building and launching rockets. And getting grades for it!….Had no idea that terrorists deserve better treatment than their victims….DO NOT buy expensive carpets for your dining room…Picky eaters drive the chef nuts….You just can’t buy your wife’s clothes. Nor wear them….Barry Bonds: Maybe he IS lying……Shrimp Paesano is to die for….Loved the squirrel catapult….Slam-dancing on the trampoline is NOT a good idea…I hate it when my suspenders break and snap into my face. On the air….This World Wide Web thing – it just might last…Alex is driving his truck everywhere. You have been warned….Pickles are not weapons. Usually….Film Of The Year: Kurosawa’s Seven Samurai….Want to buy some acorns? Finest quality, Sahib…Dennis Miller for President!…Move over Patriots, here come the Cowboys…Teresa has discovered that work is, uhm, well, work!…..Doing our best to consume as many hydrocarbons as possible….Airports are not cool anymore….Towel-snapping is listed nowhere in Wikipedia….Toothbrushes can and DO clog the drain….Gravity is overrated as a romance-enhancer….Band Of The Year: King Pelican!….Does Drudge ever sleep?….Tim Duncan has all the tools….Glue can’t fix everything…..There’s no such thing as too much time at the beach….It’s called Fishing, not Catching….Do NOT let your children write the chore list….Reality TV is a crime against humanity….Who’s in the mood for some blue Earl Weaver?

Katie
10 year-old 4th grader. Budding visual artist and singer. Compulsive jewelry maker. Knows no fear. Full of great questions. Hits her second wind every school night at 9:00 PM. Singular yet infallible fashion sense. Anything that moves or grows is her friend. Keeps the peace around the house. Or she’ll punch your lights out.

Nick
12 year-old 6th grader. A Renaissance Man. Defensive End-Violist-Scholar-Skateboarder-Serious Gamer. Attends a magnet school built around science/technology, mainly as related to rocketry. Does wicked impressions of virtually any character from The Simpsons, Aqua Teen Hunger Force, Monty Python. Likes tattoos and fast women. That last sentence is not true. Texts with the best of them.

Alex
16 year-old 11th grader. The Year Of The Truck. The living reenactment of his parents’ teen years. Only different, better. (We deny everything!) National Honor Society, varsity swimmer, extraordinary big brother. Expert at texting, IM-ing, MySpacing, cell phoning, and homeworking. Simultaneously. 2008 will be the Year My ¶*©ø∆! Braces Come Off!

Teresa
(Age/Grade withheld.) A big year of transition. Graduated in May. Passed her state test and got her license in July. Full time Physical Therapy Assistant (PTA) in September. Still World’s Greatest Full Time Mom. (Ain’t no such thing as a part time Mom.) Not a big fan of health care couture. (Who picked THESE colors anyway?) Has not yet died from Clem’s cooking. Justifiably concerned about family’s sanity. Tells range-of-motion jokes.

Jack The Dog
Refuses to participate “...in such a self-indulgent and sophomoric affair.”

Posted by Clem Spalding at 4:31 AM

This is like so great. I love it. Now, I have to kill you.

Last time we heard from you you were in China so we didn't expect to hear from you again, but then many "dangerous" products have been imported over the last few years.

I couldn't bring closure on the year without the Clem report....thanks
Tony Blair (actually the Audens)

Didn't "ASMP Boarding" get the CIA in trouble?

Clem Spalding
Clem is just starting to wake up and smell the coffee. Clem LOVES coffee.