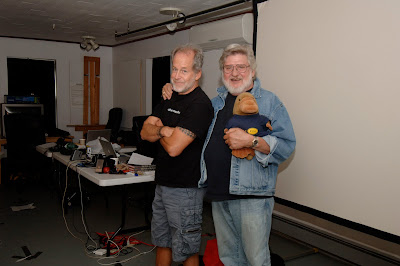 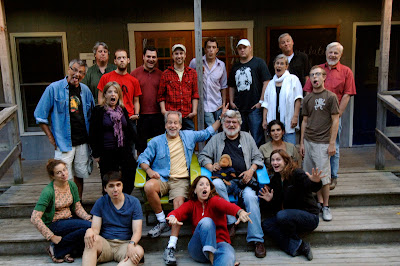 Platypus Workshop Class, Rockport, Maine, Summer 2010.
True
We are done. Nobody died.
Today feels very different, mainly due to the relief of not facing another 12-15 hour day of Video Brain Boot Camp.
PF Bentley is a true evangelist for video filmmaking/journalism and a tireless drill sergeant. Short of death, he would not allow us to fail at this endeavor. He was with us every step of the way. Dirck Halstead played his role as Good Cop/Zen Master perfectly. Due to the patient wisdom of these two men, we are all different now. We might even be able to make a go of this video craze now....
My student film can be seen here:
http://www.youtube.com/watch?v=dmnGsWZZK3Q
This film is rife with problems, (believe me, they we were inventoried by PF and Dirck) but I assure you that it is a quantum leap forward in sophistication from my pre-Platypus abilities. I won the Most Improved award, to give you an idea how primitive I was/am.
I am haunted by thoughts of getting enough B roll, framing the headshot, audio, audio, audio, shooting for the edit, 10 seconds, pacing, audio mix, audio mix, audio mix, steady camera, get even closer, the right codec, and audio.
The Platypus Workshop was 95% relevant to me and where I am at today with my Motion skills and knowledge. I endorse it whole-heartedly and with wild abandon.
Possibly-Not-So-True
Dirck watches just one bad student film too many and completely loses it. Starts screaming "This all your fault, Deaver!" Gouges out his own eyeballs with a spork and must be restrained before he can do unspeakable things to the Platypus mascot. Is said to be resting comfortably. Under heavy sedation. And under heavy guard. Now guaranteed to be one of the subjects of the next Platypus class's films.
Blunt critiques by PF lead to 4 crying jags, the invention of 23 new curse words, 3 fistfights, and an international incident between Tonga and the Ukraine. The circus midgets build a human pyramid and challenge PF to take his opinions about sound mix outside "So we can settle this like Little People!" PF's derisive laughter does not defuse the tensions, but his water cannon does disperse the mini mob, blasting one sucker right through the wall!
The final day of class fertilizes our relief such that it grows and blossoms into an all-out drinking binge. This leads to further violence, a small fire, more cursing, juvenile and surreal hand-shadow puppets on the screen ad nauseam, a BeachTek-flinging contest, the naked intimidation of all other Maine Media Workshop attendees (and by naked, I mean nekkid), and several unplanned pregnancies.
Graduation ceremonies come to a screeching halt when the Most-Likely-To-End-Up-Shooting-Web-Porn winner expresses her appreciation for the award in a previously anatomically-impossible manner. Much retching ensues.
We are escorted from campus under cover of night by the Maine Lobster National Lobster Guard.
Tech Talk
I have seen the future of Motion capture and it is shooting with a massive CMOS chip and high-end SLR glass. The image is just too rich, the focus and exposure options are just too tempting to be ignored, the entry costs and portability make it viable for a bazillion possibilities.
AUDIO
However, for sound capture, current DSLR's are a pig's breakfast:
1) Everything hinges on a lousy mini phone plug, no XLR's.
2) There's no way to accurately monitor audio recording in-progress.
3) Re-play to check picture and sound adequately requires removing the card and downloading to a laptop.
4) The hybrid solutions currently available would make Rube Goldberg jealous.
5) Far too many connections/devices involved - Murphy's Law loves this.
6) Independent recording devices seem to work well, but that defeats the whole utility of a fast-handling rig.
FOCUS!
Focus during shooting is still problematic. With all the reliable auto-focus options available to the still photographer, it's maddening to have to prefocus every shot - MOTION shots, no less - and rely on a little LCD display (even with a viewer-assist/hood) for getting it sharp. This runs counter to the wonderful look of shallow focus - not very pretty unless you nail it. We have the technology, dammit, so let's incorporate this! And what genius decided to turn off the camera display when plugged into an external display?
Note to Canon: You are off to a great start. Address these short-comings in your next generation and you will own the world.
Note to Nikon: HELLO!?!?!?!? Is anyone home?
FCP
Final Cut Pro is Photoshop on exponential steroids. There are a million capabilities, doodads, and shortcuts hidden from the casual/rookie user. We only scratched the surface and gained basic Survival FCP training, and that took many, many hours. I have no idea if Premier is better for this or that and, frankly, I don't want to know. My brain is full and oozing out my ears. But if I can learn what I have learned, then anyone can grind through this to the Promised Land of FCP-based, income-producing filmmaking.
Sincerely,
Tiger The New Filmmaker, Esq.
Need B Roll?:
http://www.youtube.com/watch?v=SItFvB0Upb8&
Posted by Clem Spalding at 8:19 PM 2 comments: 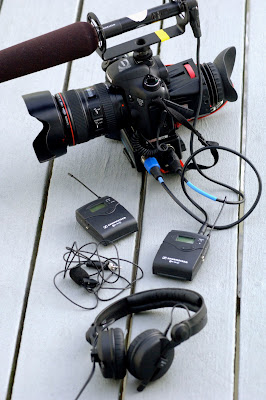 True:
This is one mother of an intense learning experience. The art and craft of storytelling with motion pictures is broken-down into digestible bits, and then shoved into your brain at an alarming rate. It's the difference between learning how to read a book and learning how to write a book. PF Bentley has perfected a teaching style that throws you out of your comfy chair and forces you to reassess everything you thought you knew about motion. Both he and Dirck are Masters of Motivation. These guys are good. I think they have done this before.
We are sent out on daily assignments that require successful execution of that day's component. Every component builds on the previous ones. The daily review of our work is a special torture. You are called to the front of the room and your naked footage is screened, dissected, and critiqued with surgical candor. It is humbling but it is also powerfully enlightening. The message is simple - If you want to play in the Big Leagues, then you had better bring your A game to every single frame. As always, Simple does not equal Easy.
We are using the Canon 7D DSLR and a new universe of add-ons to make our films. The resulting footage's quality is astonishing. Extraordinary color, detail, and shallow depth-of-field combine to deliver simply beautiful images. This also means our screw-ups are all-the-more dazzling too. And we are just starting to play with sound and editing, so now the mountain gets steeper.
Possibly-Not-So-True
My cover is almost blown! PF declares he smells a rat and threatens to withhold our rations of grog. Fortunately for me, the real Tiger Woods is suspected, charged with treason, marched out behind the classroom, and summarily shot with an old Betacam. The last we hear of Tiger, he is moaning. Curiously, he does not sound like he is in much pain.
The class is a disparate, motley lot. Bikers, ex cons, a defrocked Jesuit, several loyal-yet-clumsy Cubans, and an entire family of circus midgets. Several fist fights break out the first day when rations are distributed. The Cubans cause a scene today when they are caught hiding secret electronic listening devices in our shotgun microphones - apparently not very clear on the concept.
We are shown superb examples of editing from Hollywood classics. Who knew that Porky's III was such a landmark of innovation? Who knew Tarantino was so tender? Who knew Disney could be so erotic? (I'll never see Dumbo the same way again.)
Tomorrow we are going to delve into the proper way to stage a Hollywood scandal and make a fortune on the celeb circuit.
Tiger Woods
Posted by Clem Spalding at 9:39 AM No comments: 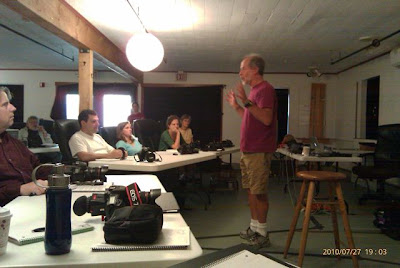 As part of my journey into Motion, I am attending the Platypus Workshop for the next ten days. As a service to my colleagues and a reality-ceck for myself, I offer you these dispatches and observations. In an effort to conceal my true identity, from now on I shall sign these reports as Tiger Woods. Please do not blow my cover!
Background:
After almost 30 years in the Stills biz, a convergence of trends, technologies, personal inclinations, and an unpaid mortgage compel me to venture into Motion. After a few sorties convinced me of the possibilities, I plunged into FCP and a hi-def camcorder in January. Having now gotten a firm grasp on what I do not know but need to know, Platypus offers the real-world training I need. Gail and Tom gave it their highest recommendation and one ignores them at your own peril. Dirck Halstead promised it would dramatically improve my love life.
True:
The drive from San Antonio, Texas to Rockport, Maine is long (2,200 miles in 3 days) but uneventful. Great pizza in Carlisle, AR and bad drivers in Pennsylvania. The Maine Media Workshops setting and atmosphere is idyllic, good vibes abound. Excellent food and smart conversation. Orientation last night with Dirck and PF Bentley clarifies the Boot Camp nature of this course. Unlike many of the other concurrent courses, ours is filled with nothing but serious pros looking to elevate and expand our game, no dabblers.
Possibly-Not-So-True:
$12,000 tuition made me swallow hard, but I took the plunge. But then came the $27,500 hotel/meal plan. And then came PF's $131,000 must-have gear list. (Gold-plated Sennheiser headphones? Really?) And then you have to get there without dying first. Rockport is populated with folks who like to throw lobsters at each other. This was amusing until a 20 pounder landed in my lap. There ain't enough melted butter in Maine to tame an angry red before spontaneous circumcision, let me tell you! Class begins with magnanimous insults and clever abuse. We are shown terrific footage and then told that this was made by other people, not us. Damn, this going to be harder than I thought!
Tiger Woods
Posted by Clem Spalding at 4:43 AM 2 comments:

Clem Spalding
Clem is just starting to wake up and smell the coffee. Clem LOVES coffee.